A Story From the Past

I wrote this a couple of years ago, and never put it up. Today I was going through my essay file and this was the only thing in it I still agreed with!

Yes I know – I have a gruesome and hyperbolic sense of humor.

My parents always planned to live in the country and have plenty of kids (plenty turned out to equal eight) but human dependents were never quite enough for my mom. Three weeks before I was born she persuaded my dad to visit a humane society shelter. They carted home a ragged brown mutt who turned out to be a red golden retriever by the time my mom finished watching my dad bathe him. His name was Josh.

This event foreshadowed the character of my growing up years – as our family grew it came to be dominated by animal-loving folks.

This was not immediately apparent, however. A camel at the state fair looked Maggie, the second born, in the eye and spit upon her. This was during her formative years; it would take her well into adulthood before she recovered her affection for furry things. However Joe, the third child and the only boy born in the first twenty-one years of my parents’ marriage, stubbornly referred to his dog Lad as “my little brother” for many years.

By the time I was a young teen our family’s persistent but weird Karma had revealed itself. Fate graciously granted us all the animals we wanted – with one catch: nearly all of them turned out to be insane upon closer acquaintance.

The chronicle of our relationship with the animal kingdom is one of escalating cerebral imbalance.

The first instance was a lean, hexed cat the neighbors had named ‘Grizzelda’ after Cinderella’s stepsister. She had witchy yellow eyes and came encased in a hard clear shellac.

I was six; we had just moved into a magical, falling apart four-acre farm and I discovered Grizzelda slinking in and out among the rotting stiles of the barnyard stalls and fences. After I had chased her, crooning alluringly, for days on end, she finally allowed me to touch her – which is when I discovered the shellac coating. Even Dad, who in our Universe was generally thought to Know Everything, puzzled over it for a few days.

Then one day Dad and I were observing the pigs which the neighbors kept in our barn when I saw a deft shadow darting in and out among the swine. “Look, it’s Grizzelda!” I shrieked. “They’re eating her!”

They weren’t eating her, however. Grizzelda had taught her pig friends the civilized feline practice of exchanging cleanings. Their large rough tongues slopped her comfortingly as she slipped past, leaving saliva all over her thin back which eventually dried into a new layer of shellac.

In her mid-life years Grizzelda settled into respectable kittified habits: bore kittens, learned to tolerate dogs, and followed the patch of sunshine on the kitchen floor in true Garfield style. She couldn’t deny her roots in the end, though; she died in yowling fits holed up back in her old haunt, the pig-barn.

Meanwhile we had experienced Willy: a small white dog, fluffy and cute when his coat was dry, rat-like when it was wet.

He seemed at first a normal dog for his breed. But The Flea Incident impacted his doggy brain in a way we didn’t expect. He must have had a staggering flea population because when Dad lathered him up with a flea-killing shampoo his fur turned red.

Then he escaped his bath.

What can four girls do, when a blood-lathered rodent tears, grinning, around the corner of the house toward them, but scream in chorus and run for it? We scrambled up the sides of the porch and stood on the handrail, shrieking and clinging to the posts – never mind that I was almost teenaged by now.

We could not have known the effect this would have on a canine brain – the smell of blood, the exhilaration of chasing down terrorized victims – but from that day on Willie must have nurtured a longing to kill.

The chance came when Mom ordered a new batch of chicks. They grew up into beautiful white laying hens. During the summer days Dad allowed them to roam the back yard picking up seeds and bugs, and saving him money on feed.

Then one morning after we had finished chores and burst out of the house into the sunshine we discovered the murderous deed – a hen, pierced and bloody, lay lifeless on the driveway. Willy came scampering up, recent gore adorning his smile. His guilt-free attitude belied, to my mind, Dad’s exasperated explanation that the dog was just a plain, old fashioned sinner, in the strictest Calvinist sense (a huge recantation of his former theological views concerning animals).

After a few more killings Dad tried an old farmer’s remedy. Willy spent a lonely night in the garage, his latest victim tied to his neck with hard baling twine. This was supposed to turn him off to the charms of killing chickens.

No one remembers how he got loose the next morning – the chaos that ensued obliterated such details. The kitchen door was open to let in the summer breeze and Willy swept in. Maneuvering expertly (the dead chicken was nearly as big as the dog) Willy galloped between our chairs, begging all of us animal-loving females to descend and join him and his new friend in their frolics.

There was little left to do but keep the chickens locked up.

Eventually Willy ran away – Mom swears it was in order to join a coyote pack.

Time fails me to tell of Maximilian, the curmudgeonly pony; of Raven, the obsessive-compulsive spaniel who eventually plunged into canine cannibalism; of our operatic troupe of bellowing goats; of Mittens, the adventuring cat who traversed the bowels of the house and used to fly, yowling, out of odd vents when the heat went on.

So I’ll conclude by detailing the life of a megalomaniac rooster.

He was one of two males in a flock of chicks all hatched the same day. The other rooster mysteriously sickened and died early in adolescence. Thereafter the remaining rooster’s every whim was worshiped to a ridiculous extent. He moved about surrounded by a flurry of submissive, gently moaning white hens.

He first displayed his delusions of grandeur by overusing the rooster prerogative of pecking recalcitrant members of his harem on the head. Other small symptoms led up to a defining incident during high winter.

One sunset the rooster declined to enter the common sleeping place. Two troubled but faithful concubines remained at his side.

Not realizing that the three chickens were not inside, Dad came out a few minutes later and locked the hen house door against raccoons.

The next morning two repentant hens huddled next to the door of the hen house, blinking in the cold. Their lord, however, was incapable of remorse. He strutted about as ever, while the tips of his comb blackened of frost-bite and fell off. Soon only a little red ridge or stump was left. It was a flat-top; Mom named him Sgt. Carter.

Summer came around again; I shortened my skirts and ran out of doors early every morning for a solitary tramp. To reach the woods in which I normally walked I had to cross the chicken-yard.

One morning as I flew out the door in a blind ecstasy of freedom I was attacked from behind. Sgt. Carter had lain in ambush beside the kitchen door; he darted up noiselessly and tore at the backs of my calves with his beak.

I considered myself a young woman by that time but reverted to type, and ran in circles around the yard shrieking and begging my brother Joe to come out and save me. He and Mom stood at the kitchen window laughing in a frenzy of irrational good-humor.

Thinking the incident was a fluke, I ejected from the kitchen door the next morning as unsuspectingly as at first. Again I was beset by Sgt. Carter, intent on annihilating my flashing legs. He never attacked anyone else.

Thereafter I went out only with a large broom in my hand. As soon as Sgt. Carter ran towards me, head lowered like a charging bull, neck-feathers standing straight out from his head, round bullet eyes rolling, I would take a golf stance, aim, and send the bird flying, unruffled and undeterred from his murderous purposes, across the yard. Meanwhile I would plunge across the chicken yard and into the safety of the woods. Sgt. Carter’s wings had been clipped at birth; he couldn’t fly into trees.

When Sgt. Carter disappeared the following winter the rest of the family missed their entertainment. I hope Willy ate him. 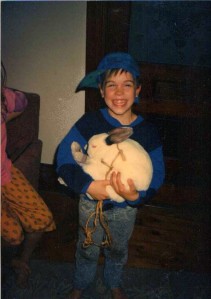 Comment rules: name and email required; website not required. No more than 2 links, please. Markdown is enabled. Enclose with 1 asterisk for italics, or 2 asterisks for bold. Cancel reply

This site uses Akismet to reduce spam. Learn how your comment data is processed.